I’ve been playing around with an SfM/Photogrammetry package I’ve been meaning to look at for a while now, MICMAC, which is made by the French Forestry/Geography institute. After polishing off my French dictionary and looking at length through the English language forum (which is very active!) I’ve got it working decently, and am looking forward to running some more experiments. One thing that’s great about the package is the division of stages within the process, much like VSfM, such that the potential for a mixed workflow between the two seems like it would be a possibility. I think I’ll also do a tutorial for non-computery people on it’s use as a decent English walk-through doesn’t seem easy to come across, though there is a comprehensive documentation, and there’s no GUI (For windows, they exist for Mac and linux) which can be off-putting. For example, I’ve pulled out the camera positions (relative, no GCPs or anything) for a small experiment I was doing, and am planning on seeing if I can overlay the same from VSfM to see how similar the extrinsic parameters are.

For now, I’ve run through one of the preloaded workflows/example data sets they provide, and am pretty amazed at what they’ve generated using 200 .5 Megapixel images (I assume they’ve down-sampled a bit). The Ricoh GR 3 they used seems to be a nice piece of kit, I love the idea of pocket cameras over SLRs for aerial photogrammetry/photography as they’re light (200g!) so fitting more than one seems like an option.

Check out the results of the sample data set (A canopy height model beside a field) here!

After the previous post it struck me that it would be pretty cool for people to interact with the point cloud I generated as I’ve seen an example or two of it being done on the web in the past. After a quick search I came across Potree, which was pretty straight forward and easy to use. A bit (a lot) of messing about later and voila! A web point cloud was born. As mentioned before, not a masterpiece, but a nifty web app and interactivity is fun! I think the potential of having this easy a pipeline from video/photos to web models just shows how far the field has come. 3D models of rooms for rent being advertised as a use springs to mind, but that’s just because flathunting takes so much time in London 😉

You can check out the point cloud of the bag here

Generating reasonably accurate 3D models from video would be a great help to the photogrammetric community as it would reduce the expertise needed within image acquisition. To test how dense a cloud VisualSFM could generate from a shaky video input I captured a 22 second video with my Canon 500D at 720p (30 FPS) and took every 6th/10th frame using a MATLAB snippet. The subsequent results (~130 images at 1280×720 resolution) were loaded into VisualSFM, feature points found and a dense cloud generated with some print screens shown below.

I plan to redo this using python to make it fully open source and make an ipython notebook explaining each step so watch this space! I think I’ll revise the input a little, or maybe redo the video adding some high resolution stills to see what kind of effect they may have.

The views in VisualSFM showing the sparse cloud –

I’ve uploaded a couple of photos from a field trip I was part of for second year Earth Science type students which went to Brighton. The chalk cliffs down there are amazing and well worth a visit, the sea was rough and my camera isn’t really good enough for these type of shot, (need a HDR camera really as the sea and chalk are SUPER bright!) but it’s a start! 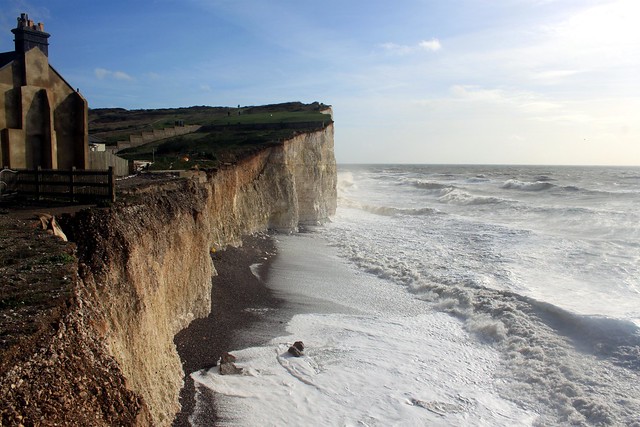 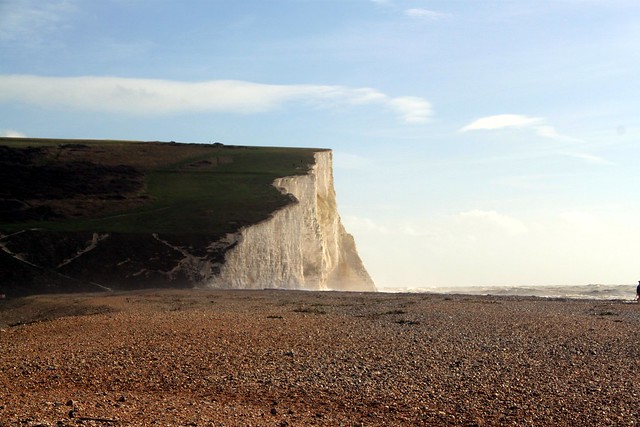 I’ve been reading a lot about dynamic range recently and have decided to share some of the interesting things I’ve come across.

Firstly, I came across a thread from 2012 on the photo forum discussing the performance of the Nikon 800D when it comes to shadow recovery. This goes to show the power of large dynamic ranges on imaging sensors and the importance of correct post-processing –

Before we see large shaded areas

No more with some tinkering!

(Credit to Philip Klinger for the images)

With this large a dynamic range on the sensor it would seem high dynamic range imaging (Bracketing) is not required in many scenes.

Secondly, I’ve returned to the DxOMARK chart for performance of consumer cameras in various categories as it’s very well presented, easy to navigate, and gives consumers a good idea of the capabilities of different cameras at a glance. Things to note are the fact that Canon (I own a Canon!) are significantly lagging behind Nikon in terms of performance of the higher end cameras. I’d love to generate an index to show suitability of each model for UAV use taking into account weight and price in the future, maybe a pet project to work on in my free time.

Lastly radiance mapping has piqued my curiosity as it has critical applications in climate modelling, amongst other things (Like graphics for computer games!). MATLAB have an interesting blog about some of the issues in combination of HDR images into a web viewer which included the mention of a radiance reconstruction process initially developed by debevec and malik. I’d be curious to see if a workable radiance measurement for each of the RGB channels in a consumer camera could be developed in the future, or whether a ‘rough and ready’ radiance estimate could be practically done using SfM. All the parameters that we need are solved for (minus the absolute radiance reconstruction), an exciting prospect.

A couple of weeks ago I had the pleasure of attending and presenting a poster at the Geological Remote Sensing Group’s annual conference in Piccadilly. Burlington house is an amazing place and setting, and it was nice to be in central London for a few days.

The majority of the focus was on two emerging technologies and their use in a geological context – hyperspectral satellite Remote Sensing (I’ve learned tons about ASTER!) and InSAR, a hot topic due to the recent launch of Sentinel 1. Some of the RADAR images on display were truly amazing, and the accuracy of InSAR always astounds me, I may try and have a look at it myself if I get some free time in the coming months.

On the photogrammetry end there were three good presentations on the topic, with one particularly interesting one done by a member of the Danish Geological Society, Eric Sorenson. They flew an airplane and had a simple GPS-IMU setup attached to a Nikon 800D and managed to acquire some impressively accurate models of a near vertical cliff. Considering access to these cliffs is nearly impossible as they are surrounded by water this represents a good alternative to laser scanning.

Rita Matildes from Lisbon university subsequently presented her research into coastal erosion in Portugal over the last 30 years and had been using SfM technologies to try and modernise the process and increase accuracies. A GoPro had been used to try and reconstruct the scene but speaking with her afterwards it seems the calibration wasn’t successful and so the 3D models were error prone. Good food for thought!

Lastly DLR presented a really awesomely cool mission where they built a camera specifically to do a survey of Mount Everest. This included high dynamic range cameras and multiple angles attached to a glider which managed to produce a beautiful point cloud of the entire mountain. Check out the video of the project here.

These three presentations showed the applicability of SfM technologies in environments that aren’t well suited for other types of data capture.

UAVs came up at multiple points within talks, and I’m hoping to get involved in some disaster response GIS at some stage over the course of my studies as it’s an extremely important and interesting field in general.

All in all it was a very enjoyable first conference experience and I should look forward to many more in the next few years. For now though, back to work.